Tourist With a Typewriter

Oh, Uncle Adrian, I’m in the reservation of my mind.

A version of this was originally published in the Virginia Wine Gazette circa 2007.

To answer your questions: 1. Yes, this is a true story. 2. Yes, I wrote it quickly and while drinking. 3. Yes, it is an homage to the work of James Fenimore Cooper. 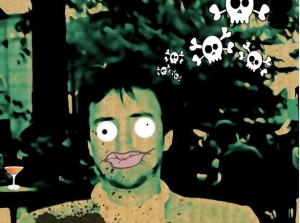 I was somewhere around Crozet on the edge of the parkway when the Viognier began to take hold. The assignment had been simple enough: pick a varietal, sample it at a few local tasting rooms, and write about it. But somehow, in my twisted mind, it became something far stranger and more dangerous. It became a challenge: I had decided to taste every Viognier on the Monticello Wine Trail in one day.

Of course it’s not possible. To paraphrase the movie Cool Hand Luke, nobody can taste 25 Viogniers. But I had to try, I had to experience the tasting room as it really was, if I was going find what I was looking for. But what was I looking for?

The heart of Grapeness, Das Drink an sich, the Virginia Wine Dream. END_OF_DOCUMENT_TOKEN_TO_BE_REPLACED

This may be the year when we finally come face to face with ourselves; finally just lay back and say it – that we are really just a nation of 220 million used car salesmen with all the money we need to buy guns, and no qualms at all about killing anyone else in the world who tries to make us uncomfortable. – Hunter S. Thompson, written on the eve of the 1972 election

France was a land, England was a people, but America, having about it still that quality of the idea, was harder to utter — it was the graves at Shiloh and the tired, drawn, nervous faces of its great men, and the country boys dying in the Argonne for a phrase that was empty before their bodies withered. It was a willingness of the heart. – F. Scott Fitzgerald